A Shared Solution for West Davis

The Utah Department of Transportation (UDOT) released the West Davis Highway Final Environmental Impact Statement on July 6, 2017. Public comments will be accepted until August 31, 2017. See the entire six volumes, 2,000 pages, in many indexed pieces at www.udot.utah.gov/westdavis. Funding ($610,000,000) for the project has been allocated by the state for construction of the highway starting in 2020, despite the negative impacts it will bring to homes, schools, businesses, parks, and natural areas. If the road is built, UBET believes it should include the features that make Legacy Parkway a better roadway with no trucks, no billboards, slower speeds, and quiet pavement. You can comment from the UDOT West Davis website or by mail.

A Shared Solution for Future Livability and Mobility in West Davis and Weber Counties An Alternative to the West Davis Highway – April 17, 2013 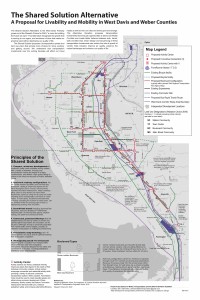 UDOT originally evaluated the Shared Solution Alternative using Wasatch Front Regional Council’s travel demand model version 7 on December 12, 2014, where it passed with flying colors! When WFRC updated its travel demand model in 2016 from version 7 to version 8.1, UDOT decided to rerun the Level 1 screening for all 46 alternatives, including the Shared Solution. In the rerun using version 8.1, some of the land use benefits were eliminated and the Shared Solution failed to meet UDOT’s congestion and delay criteria, which ended its consideration as a viable alternative to the new road. The Shared Solution did not advance to the Level 2 screening, which would have looked at the impacts on the built and natural environment. The difference in the results between the two model versions was astounding, with increases in all the congestion/delay variables—from 90 percent to 768 percent. This certainly calls into question the reliability of these predictions about the future of travel in 2040.

Results from UDOT’s Modeling of the Shared Solution Alternative 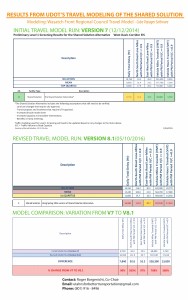 UDOT’s Proposed West Davis Freeway: Before and After 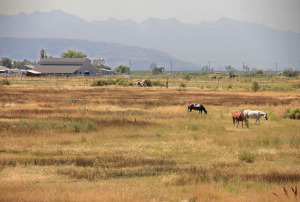 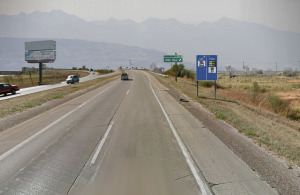 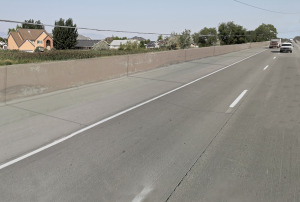 WHAT IS THE SHARED SOLUTION AND WHY SHOULD I CARE?

The Utah Department of Transportation (UDOT), with the Federal Highway Administration (FHWA), has been studying a potential transportation corridor in western Davis and Weber counties to reduce congestion on I-15 during peak hours. Their Draft Environmental Impact Statement (DEIS) was published in July 2013.

According to the DEIS, road congestion due to population growth in the study area will increase by 229 percent by the year 2040, with negative ramifications for lost productivity and intolerable congestion. At the request of local governments that have identified the need for additional transportation structure in the affected area, UDOT initiated the West Davis Corridor project to improve regional travel options.

UDOT and FHWA have proposed a narrow range of alternatives consisting of either a No-Action Alternative (no investments beyond currently planned projects), or construction of a four-lane highway. In contrast to these two options, Utahns for Better Transportation (UBET) and its partnering groups of concerned citizens are asking UDOT and FHWA to fully study and evaluate a Shared Solution alternative applying the principles of the Wasatch Choice for 2040. UDOT and UBET and its partner groups have been meeting together on this subject since 2010.

The Shared Solution includes a package of strategies that, when combined, add up to an effective means of satisfying UDOT’s purpose and need without the costs of building a new road. The Shared Solution would provide significant congestion relief while supporting community-building and economic development benefits. It would protect the existing farms and wetlands that make West Davis County such a critical part of the Wasatch Fronts ecology and a desirable place to live. Through encouraging more centered job and housing development on major roadways, implementing creative “boulevard” designs, and making transit convenient and affordable, congestion relief would be great. Rather than a single $600 million investment that benefits the few, the Shared Solution benefits the vast majority of Davis County residents and is a proactive about the challenges fast approaching our region.

The Shared Solution concept generally consists of the following aspects:

For more information on the Shared Solution, or to request a presentation, call 801-916-8496 or send email to utahnsforbettertransportation@gmail.com.